Changes in the governance of St Edmund’s House were accompanied by an increase in the number of Fellows, many of them distinguished academics, including Professor Martin Evans FRS, who was later knighted and became a Nobel laureate in 2007 for the discovery of embryonic stem cells when he was in Cambridge.  There was also a dramatic rise in the number of students, such that from a College of less than 50 students in 1970, St Edmund’s expanded to become a College of 100 students in 1990, 200 in 2000, 400 in 2010 and over 450 by 2014.   Several students in recent decades have played a wider role in the University’s life, with two being elected President of the Graduate Student Union and many representing the University in sporting contests against Oxford. Notable St Edmund’s sporting alumni include the rugby players Chris Oti and Tony Underwood who both played for England and Olympic rowing medallists Thorsten Streppelhoff,  Marc Weber and Stuart Welch.

The rise in student numbers led to the development of the College site including the construction of rooms for students and visiting academics.  In the period 1989 – 1993, the Norfolk building, which is the main College building, underwent a three phased expansion scheme designed by the architect, the late Roderick Gradidge. This included eighteen student sets, a new Senior Combination Room, an extension to the dining hall, small dining room and new kitchens, together with a new entrance hall and College offices. The culmination of the Gradidge development was the six storey entrance tower made possible with a magnificent benefaction from the Teikyo Foundation (UK). The tower not only provided another ten student sets but also a study for the Master and an air conditioned conference suite, The Okinaga Room, at the top of the tower with stunning views over the city and the surrounding countryside. The Okinaga Room was named after Dr Shoichi Okinaga, President of Teikyo University, Japan and an Honorary Fellow of the College. The tower was formally opened by the Right Honourable Betty Boothroyd, Speaker of the House of Commons.

In the mid 1990s a Master Plan for the College site was drawn up by the Dublin architect, Mr Sam Stephenson. The Stephenson plan sought to increase the student accommodation whilst retaining as much as possible of the existing landscaping of the College site. The plan, which envisaged two new courtyards located to the north and south of the existing College building on the east/west axis, was granted planning permission by the City architects on 17 July 1996.  The Richard Laws Building, containing 50 student rooms and the Anglo-German garden of reconciliation were opened by His Royal Highness the Duke of Edinburgh on 2 May 2002. The thirteenth Master, Professor Paul Luzio, FMedSci (2004-2014), previously one of the senior Fellows and a former Senior Tutor of the College, spearheaded the next stage of building, including a block of 70 rooms for students (the Brian Heap Building), a block of apartments (the Geoffrey Cook Building) and a facilities building including a library and multi-purpose meeting room (the Library Building including the Garden Room).  These buildings were opened by His Royal Highness the Duke of Edinburgh on 8th October 2007. In 2013-14 the College renewed and updated its development plan and elected Matthew Bullock MA as its fourteenth Master to lead the next phase of the College’s growth. 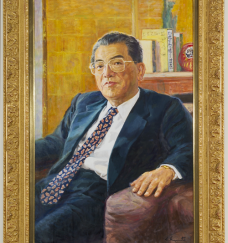